I’m in the parking lot of a truck stop in York Nebraska looking at a semi-trailer detached from its tractor unit and set down on its landing gear. TRUCKERS CHAPEL, the letters on the side of the trailer say.

Steps lead up to a broad front porch with a white lattice skirt and railing.  An American flag snaps in the wind.  You could put a couple of rocking chairs there, or just lean on the railing and look out at vehicles of all sizes coming and going at the fuel islands, people coming and going at the building where they can find bathrooms, video arcades, a convenience store with everything from jewelry, birthday and sympathy cards to motor oil, potato chips, a thin cup of coffee, and lottery tickets.  The scent of diesel’s in the air.  The roar of highway traffic from Interstate 80 is steady.  I hear the sound of air brakes sighing, the throaty purr of MP7 to MP10 engines idling.  The growl of semis moving out with horsepower ranging from the 300s to the 600s.  But the trailer in front of me sits on its leg stumps like an amputee.  Inside its cargo space is a refuge for the weary, the wounded, the devout.

There’s a Sunday service at 10am.

A TRANSDENOMINATIONAL MINISTRY, words on the truck say. 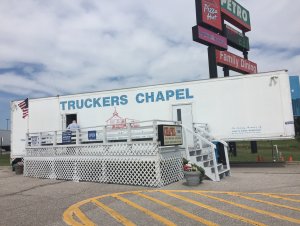 Am I looking to be saved?

My grandparents were Episcopalians from the South and Presbyterians from the Midwest.  My parents went from being churchgoers to communists, from left-leaning artists, social justice and labor activists in New York City, to parents baptizing us four kids when three of us were old enough to have an opinion about it.

“Why didn’t you get this over when we were babies?” my oldest brother Graham said, exhibiting the gift for historical analysis that would mark his career.  Older brother David smiled his sneaky angel smile and held his counsel, already in trouble for chasing a pretty classmate to steal her milk money.  Or was it simply love?  Later he became a passionate art collector, a gambler or market trader—choose your label.

When I was baptized, I was a three year old wandering at will on our beautiful farmland on the shores of Lake Champlain in Vermont, and wandering at will in my imagination, a happy believer in all gods.  I clutched the church’s gift of a glow-in-the-dark plastic cross which I would charge up with fervor each night, resting it on top of the light bulb of my bedside lamp until the time I fell asleep and the cross melted into something Salvador Dali might have made.  My parents read C. S. Lewis’ Narnia series aloud to us and the Christ became a majestic lion, fearsome but loving, and religion was a great adventure between adjoining worlds.  I walked deep into woods and clothes closets, hoping to cross into Narnia and meet Aslan and Reepacheep.  As I studied for first communion, the priest was disturbed by the liberality of my biblical interpretations.  I was definitely a believer, but hewing to the mystical and metaphoric.  The mark on my forehead at Ash Wednesday, the palm in my hand on Palm Sunday, the wine and bread on my lips, the incense in the cold stone chapel in Kent, Connecticut, the white breath of my prayer—these made utter sense to me.  God was manifest in the world and through my five senses, as well as the sixth sense of transcendent imagination, I knew God.  The universe started with the Word.  I would give myself to the Word.  Later, waffling between becoming a nun in a silent order (who wrote but didn’t talk), or giving myself fully to my boyfriend and the sweet mysteries of sex, I guess I lost my way . . .

Today, at a truck stop in York Nebraska, I’m not looking to be saved from anything except running out of gas or falling asleep at the wheel.

The gritty wind pushes at me.  I think about entering the chapel.  Is simple curiosity adequate motivation?  I get out my iPhone and press the camera icon.  A car drives up.  A man gets out and looks at me.  I think he’s going to chastise me for taking pictures of what is not, after all, a tourist attraction, but a place where a person can wrestle with his soul and listen for the word of God in silence.  I’m equally afraid that the man approaching the truckers chapel is going to invite me in.  Then I’ll be stuck.  Haven’t we all been there?  Waylaid?  Could be by somebody who wants to share their religion, their cause, their advertisement, their plea for money or membership, their fervor for whatever.  Or it could be  like Saint Paul going about his business and finding himself flat on his back under God’s brilliant stare. This man smiles at me as he walks lightly up the steps to the chapel, saying, “You should go round to the other side, see it from that angle!”

There’s a full color painting on the double doors at the back end of the truck: a semi is rounding a bend, speeding downhill, perilously close to plunging off the road.  You can see a faint red scar in the dirt of the mountainside where some other unfortunate soul lost control.  In the background are fir trees and snowy peaks.  I step closer.  From one peak a clenched fist rises against the sky, a fist the same pale red as the clouds and the scar made by the truck that plunged to perdition.  I stand there, looking at that clenched fist.  It’s familiar from my parents’ world, their involvement in social justice issues.  A clenched fist raised, symbol of solidarity, of resistance, of support and strength in union.  Symbol of workers back when unions had their roots in socialism, and socialism was not a dirty word.  And as I came of age, that clenched fist was a symbol of black power, a symbol of Native American resistance, and Cesar Chavez and United Farm Workers.  And then there is the white fist on a black ground, symbol of White Supremacists.  And the raised fist of the Olympian victor, Michael Phelps being just one.  Where did it start, this raised fist, I wondered.  Later I would I look it up.  Seems that it started in Mesopotamia with Ishtar, powerful goddess of sex and love, her fist held at her heart.  Let’s face it, sex and love can get us all in trouble.  Lovers of the world unite!  Including at truck stops . . . .

The caption of this painting says, In His Hands. Below that, Jesus said, Come to me all you truckers who are weary and heavy loaded and I shall give you rest –Matthew 11:25, abridged.

Abridged!  Now this I love.  This I can get behind.  Totally.  Standing there in the windy parking lot, I feel my Christian upbringing hauled up to date, abridged in some beneficial way I can’t quite define.

But the guy said to walk around to the otherside, see it from that angle, so I keep walking.

Same message as on the front, Truckstop Ministeries, a trans-denominational ministry reaching the truckers of the world with the gospel of Jesus Christ.  Why did the guy tell me to look at the chapel from this side?  I glance around, searching for clues.  Trash in the grass at the edge of the tarmack, the sacrilege of glinting glass, plastic bags. Below me on I80, cars and trucks speed by, heading east, heading west, coast to coast, and I get it: This side faces the highway.  This side faces the wayfarer.

I imagine a weary trucker on I80, missing his wife and kids (or her husband and kids, but let’s face it, most truckers are still men).  His shoulders are killing him.  His eyes are dry from road glare.  His hips ache.  His stomach hurts from too much coffee.  His body is lonely.  He’s in danger of drifting to sleep, drifting off the road, drifting into God knows what . . .

Back at the car, my husband wonders what the heck happened to me.  He finished putting air in that leaky tire, he finished his Milky Way, he says, handing me the Almond Joy he knows I love—and he’s been looking everywhere for me, more and more worried, thinking I’d been kidnapped or something.  Something like that, I say, buckling up.

I try to explain what happened.  The feeling that I’ve been abridged.  The text of my life altered a little.  That while he was finding the air hose to keep us safe on the road, while he was in the convenience store buying us the sweet jolt we need to stay awake to our journey’s end, I found the truckers chapel.

Saved!  Saved by my imagination from the sin of intellectual disdain, doubter’s smugness, gawker’s irony, a Christian who upgraded to Buddhism, whatever, because, like any of us, I’m at risk of that great sin of dismissing another person’s way. 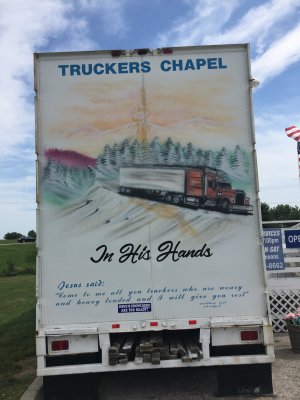