The pioneer woman stands in the door of a sod house with a blue enamel basin of rinse water in her hands. Early morning and the air already simmers. She listens to the rustle of grasshoppers. She narrows her eyes and watches her husband and son light fires at the edge of the cornfield. Smoke from green cottonwood branches rises, floats over the corn, and settles. Hoppers rise, swirl, and settle back in place.

The woman crosses a dry dirt yard. A dusty cat rolls over as she passes. She walks toward another woman, silhouetted against the metallic sky. This other woman is deathly still, as if in shock. In the vegetable garden at her feet, hoppers have chewed the leaves of beans and squash to brown lace.

Our pioneer woman kneels down next to her. She brushes hoppers off a coarse brown muslin skirt, the same skirt she is wearing. One by one she removes rocks from the hem. She lifts the skirt and smiles. Inside a lattice of thin steel bands, flowers the color and shape of flames are blooming! Her Celosia plants are intact. Tipping the basin, she releases the water slowly at the feet of the flowers, at the feet of the dummy, a dress form.

Celosia. A word derived from the Greek, meaning “burning,” referring to the flame-like form and color of the flowers. Celosia is a member of the amaranth family whose place of origin is disputed. Perhaps it came to us from West Africa with the slave trade. In Nigeria it is known as the food that makes husbands fat and happy—soko yokoto. Perhaps it came to us from Mexico. A valued immigrant, in any case, its leaves are nutritious, its flowers exotic in their beauty. Wherever it originated, Celosia is eaten around the world and valued for its sturdiness. It grows well in hot climates, dry or humid. It needs some water, but not a lot. Celosia cristata, with its dense colorful crest, is the variety known as cockscomb. Flor de terciopelo to South Americans. Velvet flower.

Last evening, a friend exclaimed at the orange, rose, and hot pink flowers of Celosia cristata in a vase on my living room table. I told her they came from the local farmers market here in eastern Nebraska. She said she remembered her grandmother in western Nebraska treasuring Celosia. 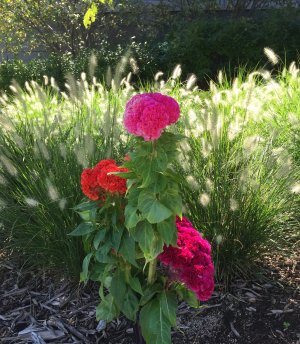 Imagine that you are a pioneer woman. Your house is made of sod and your clothes are the practical colors of earth and autumn prairie. You work to feed your family, to survive grasshoppers and drought that leach green from grass and leaf. What a bold companion Celosia makes! Even if you don’t plan to eat it—not yet, anyway—your soul needs its luxury. You are inventive in your determination to protect it. You can’t cover your crops, but maybe you can hide a small patch of Celosia until the hoppers pass. Your husband watches you dress the dummy and assumes you are devising a scarecrow. Yes, but it is also a refuge, this woman of your size and shape. A stronger woman, defiant in the face of loss, sheltering life beneath her skirts.

Emily Dickenson wrote that hope is the thing with feathers that perches in the soul. Here in Nebraska, around the time that Dickenson lived, hope might have been an exotic flower hidden inside a woman of steel.

Here is a shot of Tyler Magnuson of Botna Burrow at his stand at the Aksarben Farmers Market—my go-to man for Celosia! 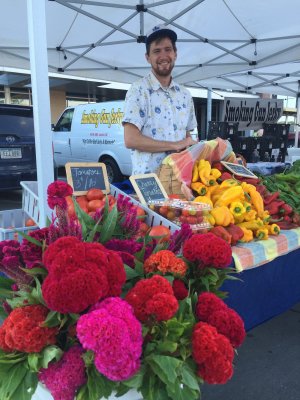